The following is a guest post to celebrate the release of Matt Doyle’s Shadows of the Past, the latest installment in the Cassie Tam series.

Sci-Fi and Why I Write the Stories I Do

I’ve always loved sci-fi. As a kid, I used to spend hours watching shows like Star Trek: The Next Generation and Farscape. Then, when anime started becoming readily available in the UK, I tended to gravitate towards things like Ghost in the Shell. There has always been something appealing about looking to the future for me.

Now, that isn’t a lead in to me saying that life was too hard or too perfect in the present. Honestly, I’ve had a fair few ups and downs over the years. Like most people, the highs have been great, and the lows have been personal disaster zones. So, no, my love of sci-fi never came about due to a need to escape or look for excitement.

It probably started because I got to spend time with my dad watching some of the shows. We don’t have huge amounts in common, but Farscape was something we both enjoyed for example. As I watched though, I realized how much I loved seeing where we could end up as a species. The multi-cultural alliances between humans and aliens, the technological advances, the exploration of space… it was all so magical!

So, I naturally gravitated towards writing sci-fi. Horror too, because I always loved the genre, but sci-fi was at the forefront. My first ever short story is a good example; it was a school project when I was ten or eleven, and it was called Malfunction. It was the story of a circus that contained nothing but robot clowns. The clowns malfunctioned and turned violent. So, sci-fi and horror combined. The main thing is though, that even when things turned dark, sci-fi always had that air of hope for me. Even if the characters in mortal danger, they were still in the future, surrounded by all these great societal and technological advances.

Looking back on it, I think that need to picture the future had a long lasting effect on me. When I started questioning my sexual orientation and my gender, it was the era of the 56K dial-up modem. As such, the internet was far less vast, and search engines were not as well optimized as they are now. If you weren’t sure what you were looking for – and with a gender that shifted on a regular basis and a confusing attraction to people regardless of gender in the late 90’s and early 00’s, I really didn’t – you weren’t likely to find it.

So, I was reliant on fiction to learn. When it came to regular works, I was bombarded with (usually negative) stereotypes. When it came to my much loved genre fiction, I found it hard to find anything close to what I was experiencing. The thing is though, I wasn’t really interested in coming out stories. I was learning who I was, I didn’t want to see people who were as confused as I was. Coming out stories are important, but they weren’t what I needed.

Now, we have a lot more stories like that. And I am very proud to be one of the authors that creates them. I write stories about adults who have already come out and are finding themselves in different ways. The queer heroes, who are living the future that my younger self would have loved.

Sci-fi made me look ahead. Now, I write stories for those that want to do the same.

Matt Doyle is the author of the Cassie Tam series, including Shadows of the Past, which was just released by NineStar Press.

Shadows of the Past is the new novella collection set in The Cassie Tam Files universe! Enjoy two new stories that follow PI Cassie Tam and her girlfriend Lori Redwood as they deal with the fallout from LV48. This book is part of a series and needs to be read in sequence.

A Week in New Hopeland

When Lori Redwood agrees to help out her girlfriend, PI Cassie Tam, by going undercover at a local shipping firm, she gets more than she bargained for. Her ‘boss’ Mr. Graves is a misogynist and a bully, and has been targeting one girl in particular. Cassie is known to him, and he tends to be cautious around Tech Shifters. Which means that Lori may be the best person for the job.

Will Lori be able to help Cassie gather enough evidence for the police to act, or will she become the next target?

Shadows of the Past

PI Cassie Tam is not the only person who lives with regrets, and like most people, she just wants to get on with her life. But in New Hopeland, the past never remains buried. When she’s hired to track a stalker that’s been using some interesting tech to mask their identity on the city’s security cameras, Cassie ends up face-to-face with her darkest memory.

PI Cassie Tam is not the only person who lives with regrets, and like most people, she just wants to get on with her life. But in New Hopeland, the past never remains buried. When she’s hired to track a stalker that’s been using some interesting tech to mask their identity on the city’s security cameras, Cassie ends up face-to-face with her darkest memory.

Can Cassie find out who’s responsible before her past mistakes tear her – and her friends – apart? 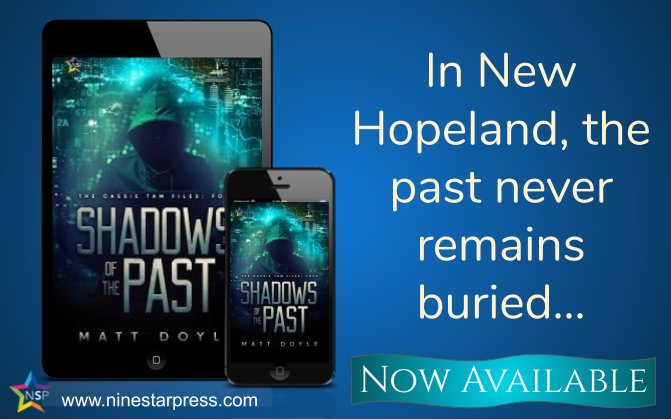 Matt Doyle is a speculative fiction author from the UK and identifies as pansexual and genderfluid. Matt has spent a great deal of time chasing dreams, a habit which has led to success in a great number of fields. To date, this has included spending ten years as a professional wrestler, completing a range of cosplay projects, and publishing multiple works of fiction.

These days, Matt can be found working on multiple novels and stories, blogging about pop culture, and plotting and planning far too many projects.

Thanks to Matt Doyle for visiting the EMPATHY series blog!

International Book Awards Finalist | Writing Coach | Writescast Network Founder. His science fiction debut, IMMINENT DAWN, was named as a finalist in the 2020 International Book Awards. That title's sequel, MOURNING DOVE, and his first novel, ACCOUNTING FOR IT ALL, are also available through NineStar Press. View all posts by r. r. campbell